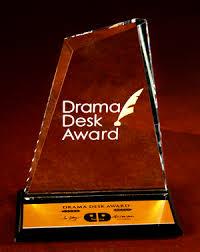 The 58th Annual Drama Desk Awards will take place on Sunday, May 19, 2013 at 8:00 PM at The Town Hall W. 43rd Street). Gretchen Shugart, CEO of TheaterMania.com and managing Executive Producer of Drama Desk Awards, will present the ceremony in conjunction with Joey Productions. This year, the Drama Desk Awards, which are presented annually, honor outstanding achievement by professional artists on Broadway, Off-Broadway and Off-Off Broadway, will be webcast live on www.TheaterMania.com. What sets Drama Desk Awards apart is they are voted on and bestowed by theater critics, journalists, editors and publishers covering , “without any vested interest in the results.” For this reason, Drama Desk Awards reflect both for all aspects of New York’s professional theater and a level of erudition and theatrical unparalleled in our industry’s other prize-giving organizations.

“It is gratifying for TheaterMania to again present Drama Desk Awards at New York’s famed Town Hall,” Ms. Shugart said. “Audience members and webcast viewers from the New York community and around the globe are in for a treat as the Awards show celebrates the diversity, creativity, and talent that live theater has to offer.” Isa Goldberg, president of Drama Desk, added, “Drama Desk Awards, honoring outstanding achievement by professionals working on the New York stage, reflect the knowledge and theatrical experience of our membership. Indeed, this year’s nominating committee is comprised of Drama Desk members who reflect the highest level of distinction as theater critics, scholars and journalists.”

For Tickets call: 212-764-7900 or go to www.dramadeskawards.com for more information