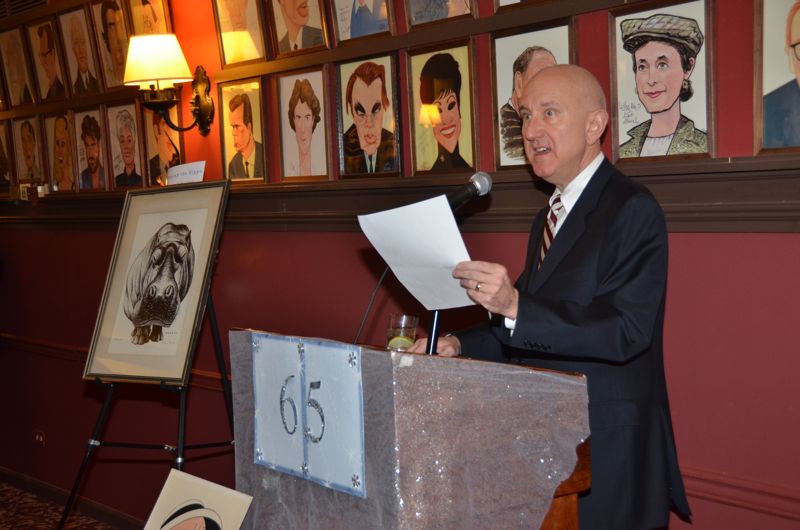 Drama Desk celebrated the 65th anniversary of the organization and the 60th year of its awards with a sparkling Diamond Jubilee at Sardi’s on November 15th. Lauren Yarger reports.

More than 100 members of the Drama Desk, winners of the Drama Desk Award, and guests came together for the celebration, which featured displays of artwork by former member Sam Norkin (his widow, Francine, and daughter, Sue Fallon, generously lent part of their collection for the evening’s festivities). Live piano music, hors d’hoeuvres and official greetings from Bill De Blasio, Mayor of New York, highlighted the evening.

Board member Leslie (Hoban) Blake was introduced as the organization’s inaugural Historian.

Below is the text of the letter from the Mayor:

It is a great pleasure to welcome everyone as the Drama Desk hosts tonight’s Diamond Jubilee in celebration of its 65th Anniversary and 60 years of the Drama Desk Awards. The power of the performing arts unites us all, and New York City is proud to be home to the plays and musicals that have inspired generations of artists and set the pace for the international theater community.

Theater is an integral part of our city’s culture, and since its founding 65 years ago, the Drama Desk has worked to promote artistic excellence here in New York and educate the public about this vital industry. Comprised of critics, reporters, writers, and arts editors, the membership of the Drama Desk achieve this mission by organizing educational forums and discussion panels and by honoring outstanding artistic achievement through the annual Drama Desk Awards. Now in their 60th year, these awards are presented to those who have demonstrated excellence in Broadway, Off-Broadway, and Off-Off Broadway productions.

Chirlane and I are delighted to join tonight in commending all those associated with the Drama Desk for everything they have contributed to the arts and for their dedication to preserving and strengthening the theater community. On behalf of all New Yorkers, congratulations on the milestone anniversaries of both the Drama Desk and the Drama Desk Awards. Please accept my best wishes for a wonderful evening and continued success.