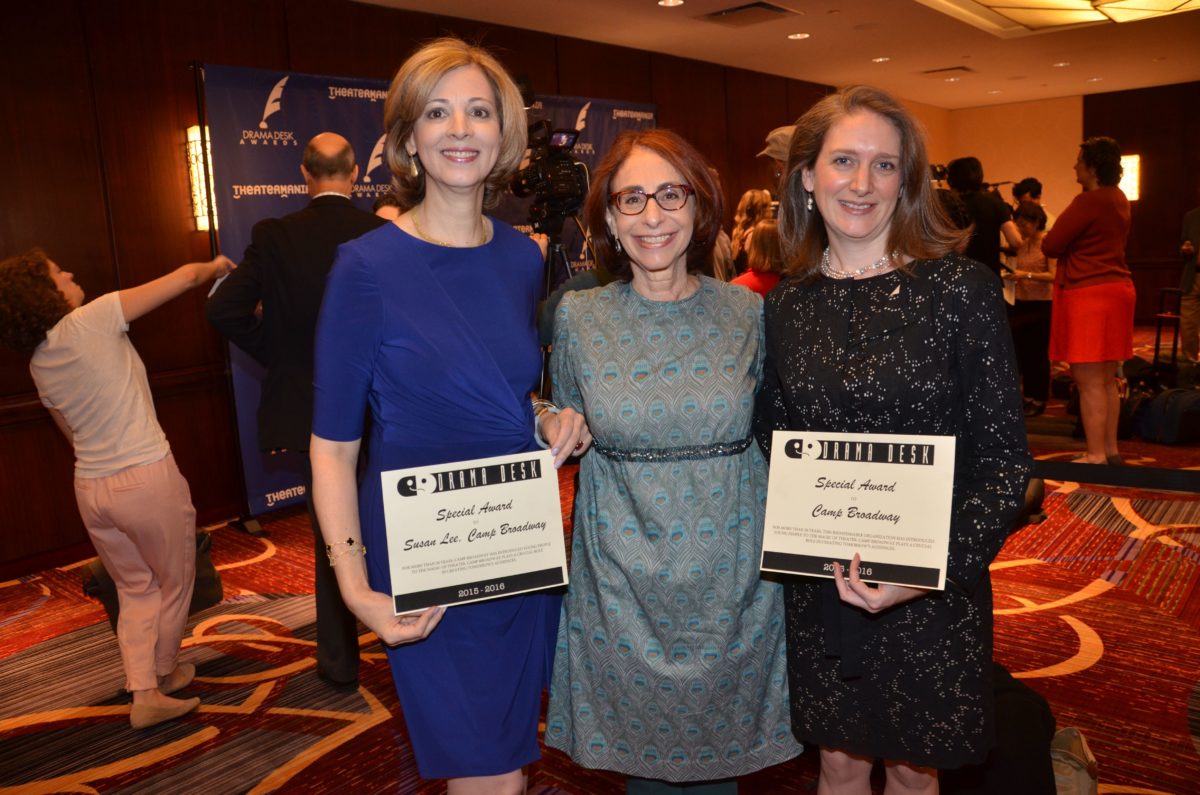 This year, Drama Desk will bestow five Special Awards at its annual ceremony. Cathy Hammer illuminates how one of this season’s recipients, Camp Broadway, has put a dramatic sparkle in young people’s eyes.

In 1995, before she founded Camp Broadway, Susan E. Lee had an “aha moment” scouting cornfields for a friend who builds mazes. She happened upon a group of school children enraptured by a farmer discussing the value of agriculture. Though feeling out of place in her suit and high heels, Lee saw that the farmer enthralled the kids because he was providing them with real-world connections to the business of cultivation. It dawned on Lee, formerly the chief marketing officer for The Nederlander Producing Company of America, that Broadway could cultivate its audiences of tomorrow by providing young people with a similar in-depth opportunity to engage with theater-making. At the time, there were plenty of courses promising to turn kids into the next Bernadette Peters, as well as a few directed at underserved populations. What was missing was an experiential, immersive program focused on kids who liked theater, but didn’t want to make a career of it. Camp Broadway was born.

Since then, Lee has arranged for an array of professional theater artists to expose her young participants to the skills and crafts involved in creating a Broadway show–not a piece of children’s theater, but an adult Broadway production, contextualized for kids. Most participants are average students on their way to becoming a singing attorney or a dancing plumber. Lee’s goal is to nurture their love and appreciation of the entire artistic process. In this way, as Managing Director Melissa Caolo puts it, Camp Broadway is “The Little League of Broadway.”

Camp Broadway offers summer programs and workshops for children aged 6 to 17. The titular “Camp Broadway” session for 10-17 year olds runs each July for a 40-hour week and explores two shows connected by a theme. The topic for 2016: entrepreneurship. During camp, participants will develop numbers from Legally Blonde and How to Succeed in Business Without Really Trying. They will also attend a performance of School of Rock, chosen because, obviously, productions featuring children make an especially strong impression on participants since they see performers on stage similar to themselves.

Camp Broadway is available in New York and has expanded to 13 partner cities around the country. Young people travel from all over the world to attend. The retention rate is high and younger siblings often join once they come of age. Ethnic and economic demographics differ by area, and each city sets an appropriate level of scholarship for its constituency.  No matter which location they attend, every child sees theater. Over the years, Camp Broadway has purchased over a million dollars worth of tickets for the 400,000 kids they have served. These outings are essential for engaging them and their entire family in an on-going relationship with the theater.

The organization keeps in touch with participants, graduates, and parents through various social media platforms. Community Engagement Manager Kerry Dineen reveals that Instagram is the favorite follow-up tool of the current crop. Their exchanges cover shows they’ve seen and confirm that their appreciation of theater is an ongoing activity. Lee imagines her students voicing Camp Broadway’s key take away: “What this taught us is that theater is something we can do our whole life long.”

Cathy Hammer is a new Drama Desk member and the creator of the Unforgettable Line: Observations of a New York Theater Lover (https://unforgettableline.wordpress.com).