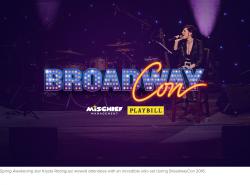 The Drama Desk is presenting a panel, “Everybody’s a Critic,” at BroadwayCon on Saturday, Jan. 28.  This exploration of the changing nature and function of theater criticism in the digital age will be moderated by Chris Jones, chief critic of the Chicago Tribune.

“Everybody’s a Critic” will be held from 3 to 3:50 p.m. on Jan. 28 at the Jacob Javits Center in Manhattan. The panel is one of hundreds of special events planned for the second annual BroadwayCon, Jan. 27-29. More than 10,000 theater fans are expected to attend the weekend conference. Further information and the full conference schedule are available at broadwaycon.com.

The panel, which the Drama Desk has undertaken at the invitation of the organizers of BroadwayCon, has been planned by Board members Lauren Yarger and Elysa Gardner.

TICKET INFORMATION: www.broadwaycon.com. Once you purchase, you will receive an order confirmation email from Eventbrite on behalf of BroadwayCon.