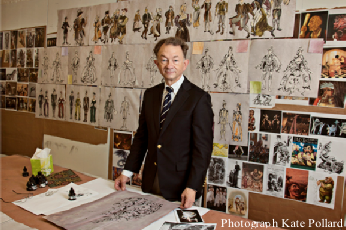 John Istel continues a series of interviews with Drama Desk Award recipients whose work has returned to a New York City stage this season.

There may be no more purely theatrical pleasure on Broadway these days than the climactic first act moment in Rodgers & Hammerstein’s Cinderella when the put-upon-orphaned daughter twirls around and POOF–before our eyes is transformed from a prole in a peasant dress to a princess in waiting. Naturally, Cinderella’s fairy godmother gets the credit for the audience’s oohs and aahs. But as longtime Drama Desk members and followers know, the real magic wand is wielded by costume designer William Ivey Long. Well, unless you think Long topped himself with his six-foot tall dancing hot dogs in Bullets Over Broadway: The Musical!

Long’s 2014 nomination for Outstanding Costume Design for Bullets… marks his 20th Drama Desk nod–an even score–from which the indefatigable legend and Theater Hall of Fame inductee has won a half-dozen awards to place on his mantle.  In fact, since his first nomination in 1980 for 1940’s Radio Hour, Long has never gone more than five years without being recognized by Drama Desk. His longest absence from Drama Desk’s festivities began after his first win for Nine in 1982 (and who can forget Anita Morris in perhaps the sexiest costume ever created) to his 1987 nomination for Smile. What a rare dry spell: the Yale School of Drama grad and current American Theater Wing chairman has been nominated 11 times in the last 15 years, winning the Drama Desk Award for The Producers (2001), Hairspray (2003), as well as for last season’s Cinderella.

Long’s tap dance between “taste and travesty” (the title of a 2007 exhibition of his work in North Carolina) is currently represented on Broadway by the revival of Cabaret (think of those sensual spider web suspenders enwrapping Alan Cumming) and Chicago!, closing in on the end of its second decade. Earlier this season, Long designed costumes literally made of light for the fairy tale musical, Big Fish. He found fabric onto which projections could shape and transform trees into people. In addition, to his two major Broadway shows this season, Long has designed the duds for a Met opera, a downtown “vaudeville apocalypse,” and an upcoming project at the Kennedy Center. Not too shabby for a Southern country boy (“I’m a farmer and you can’t take the farmer out of the boy”} who never set North originally to be a theater designer. Long took some time to reflect on how he got here from there.

Can you describe your earliest pre-professional theater accolade, award, or other sign of encouragement?

So I didn’t win awards as a youth. But I remember my first. I was an adult and it was 1982. It was called the Maharam Award [which later became the American Theater Wing’s Hewes Design Award]. It was funded by the family who created fabrics for a lot of industrial shows — a lot of Broadway gypsies survived on these industrials. Mr. M. created this award because he loved theater and it was the first and only award just for design. I won for Nine and it was a small dinner. Anita Morris presented the award to me and the moment was burned in my brain. It was just such a nice gathering of theater people.

It had been five years since I’d come to New York City from Yale’s School of Drama. I’d been in various schools for ten years! So when you’re in school for ever and ever and then you’re in the Meryl Streep class where everyone’s honor bound and righteous, where awards were seen as demeaning and competition as offensive, and where to be doing your art was the honor…. well, I was trailing a bit of that attitude. Then I won. I think of the obvious words like “validation” writ large in the sky.

What do you most remember–an image, thought or memory–about any of your six Drama Desk Award ceremony wins?

I remember the one for The Producers (2001). It was the biggest whirlwind. Anyone who predicts the awards will go a certain way knows bupkus. I call three awards the Triple Crown — the Outer Critics Circle, Drama Desk and the Tonys. For me, the Drama Desk Awards are the harbingers of spring. I’ve been around since before they were recorded and I remember they’re like the Oscars, more glamorous than the Tonys. I also remember my losses. On the other hand, Drama Desk was the only organization that nominated my work in Christmas Carol at Madison Square Garden and I was so darn tickled…even though I lost.

What would you say is the single most important mentor or moment in the great chain of events in your life that led to your involvement in so many of this season’s productions?

My relationship with the director Susan Stroman. Big Fish was our 13th Broadway show together and this season we’ve also worked on Bullets over Broadway; the Metropolitan Opera’s Merry Widow with Renee Fleming; and a downtown workshop of The Last Two People on Earth: An Apocalyptic Vaudeville with Mandy Pantinkin and Taylor Mac. Susan and I are also collaborating on The Little Dancer, which opens next fall at the Kennedy Center.

Your costumes so often revel in theatrical transformation, especially in Cinderella and Big Fish.

I love magic onstage, the experience of theater magic, not film magic. Low tech. Cinderella was the apogee of that. In the 1990s I worked with Siegfried and Roy and I learned a lot from their love of magic and the audience. But I’m always looking for new things. When you keep it simple and low tech it would seem there was little you could do, but in Big Fish, because it was a different type of storytelling and because of the use of film and projections, I worked with Benjamin Pearcy and found some fabrics and we could project on them. That was the beginning and we found I could make patterns on it. These are firsts for me. We had 12 computers! But I’m a Luddite–I don’t even own a cell phone.

What’s the best advice you’d give a costume designer starting out that you wish you had been given?

My advice: look to your relationships and “grapple them to you with hoops of steel.” Is that Emerson? Or whatever he said about friendships. By that I mean your relationship with the director is the most important one you’ll ever have. We’re confidence people, and we have to be trusted to put the play on first and that’s the relationship developed at school or at those shows you do for free. I tell the young people in my (internship program) do as many things you can for free to support the dreams of others, because at the end of the day that’s what we do: support the dream of the director, playwright, producer. Secondly, the more you can bring to the relationship and the more you can do research, do dramaturgy, the more valuable you are. Lastly, I always say: “Hang around with smarter people than you…”

If you could give out a special William Ivey Long Drama Desk Award to any theatrical work or artist who—or what—would be the recipient?

I love so much, so many artists. I presented a Hewes Design Award to Ann Roth and I had personal memories and I listed the top ten things that changed my life from her work. It’s always important to be open to those influences. Roth and Willa Kim are the two at the top of the business–they’re equal, they’re twins–not literally, but as influences on my career.