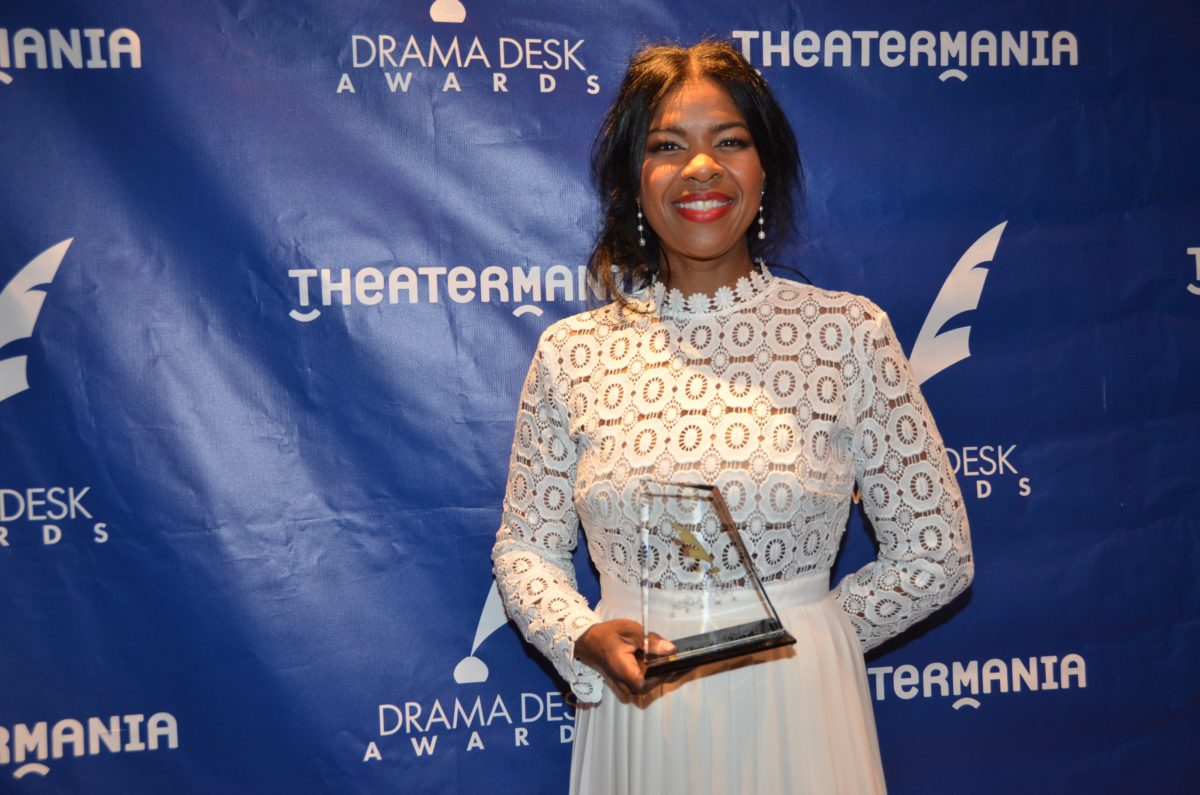 Designer Mia Neal felt “beyond appreciative” when she won a Drama Desk Award in June for her work on Shuffle Along, or, the Making of a Musical Sensation of 1921. During her career, she had been honored by some of the best in the business, including by a few for whom she had apprenticed. What Neal didn’t know was that she had also just made history. That’s because Neal, a self-titled “strategic stylist,” won the first Drama Desk for Wig and Hair design ever bestowed in the organization’s 61-year history.

Drama Desk’s award rivets attention on a time consuming, unique art that is typically acknowledged only as part of the overall costume design. In Ms. Neal’s case, she was introduced to the singular craft when, as a talented hairdresser, she was invited by Juilliard to participate in their exclusive Professional Internship program in hair and make-up. After graduation, she worked to perfect her talents by studying under as many professionals as possible. Luckily, the world of wig design is a small one, and Neal found that most in the field were generous with their time and knowledge. She slowly earned her reputation for developing period looks, primarily for African-American actors. Throughout her 15 years in theater and television, she has periodically returned to Juilliard to encourage others to follow this collaborative and rewarding career path.

That doesn’t mean the work is easy. Each of Ms. Neal’s ventilated wigs represents 80 hours worth of work—before styling. She begins by taking a mold of the actor’s head. This is essential for ultimately forming a natural hairline. Next, each strand of hair is knotted individually by hand. Finally, the actors begin modeling the wigs during their rehearsal process.

Neal was fortunate that most of the Shuffle Along… cast members had experience with wigs and were therefore comfortable moving in them. But she admits it’s always a little more challenging with males because they are less likely to have one in their personal wardrobe. Neal also found that the particular pieces for Shuffle Along… were best evaluated only after they’d been seen together with full costume and make-up.

While Neal had previously created finger waves and other looks from the 1920s, she acknowledges that her achievement with Shuffle Along was due in large part to the trusting relationship she shared with the show’s costume designer, Ann Roth. She calls Roth “simply a genius,” before rushing to point out, “that’s not a word I use lightly.” Roth, along with director George C. Wolfe, liberated Neal from concerning herself with re-dressing and maintenance issues that can inhibit creativity. She was therefore able to fully explore all of her ideas inspired by period photos, historical readings, and the original Shuffle Along, from which last season’s show was adapted.

This artistic freedom resulted in highly individualized wigs, with no general back-up chorus look. The audience was transported to a time when black actors used wigs for specific experiences and their hairstyles expressed both on- and off-stage personae. This may explain her triumph over the other worthy nominees—David Brian Brown (She Loves Me), Jason Hayes (The Legend of Georgia McBride), Robert-Charles Vallance (Women Without Men), and Charles G. LaPointe (The School for Scandal). Neal could not have been more surprised to hear her name announced. “Now I really feel like I’m part of a community,” she added with joy.

The possibility of adding a new category to the Drama Desk award lineup was first discussed after members of the Nominating Committee attended The Legend of Georgia McBride, a musical about an Elvis impersonator who becomes a drag queen. As one would expect, the wigs were exceptionally elaborate, flamboyant, and distinctive. The nominators recognized that their design clearly required a special discipline separate from the costumes. As the season progressed, it became apparent to the committee that if they included this new award, there would be a number of worthy contenders.

The decision was in keeping with Drama Desk’s tradition. The organization’s award categories have always been dynamic, drawn from the production elements that stand out over the course of a season. In the past, if a discipline wasn’t strongly represented, the category might be eliminated entirely. Moreover, Drama Desk was one of the first large general theater award-giving organizations to recognize Sound Design, giving its first award for that discipline in 1980, more than 20 years before the Tonys, who have since retired the tribute. More recently, Drama Desk began recognizing projection designers, a technical element few other theater awards honor.

It is not a surprise that the addition of this particular award would happen under new Committee Chairman, David Barbour. Having covered theater design since the 1980s when he was a writer for Theater Craft Magazine, Barbour is trained to pay more attention to design than most. He assumed there was—or at least had been—a Drama Desk Wig and Hair Award and was surprised to find no history of one. “Without quality wig and hair design, a hairdo can jar the style instead of completing it,” he explained. The rest of the committee members agreed and the category was made an official part of the 2015-16 ballot. Thanks to the nominators—and the work of Mia Neal and her colleagues—audiences are sure to start noting the artistry in their craft.

Cathy Hammer writes and maintains The Unforgettable Line, spoiler-free commentary about New York professional theater.  She is also a stage manager member and former committee chair for the Directors Guild of America.