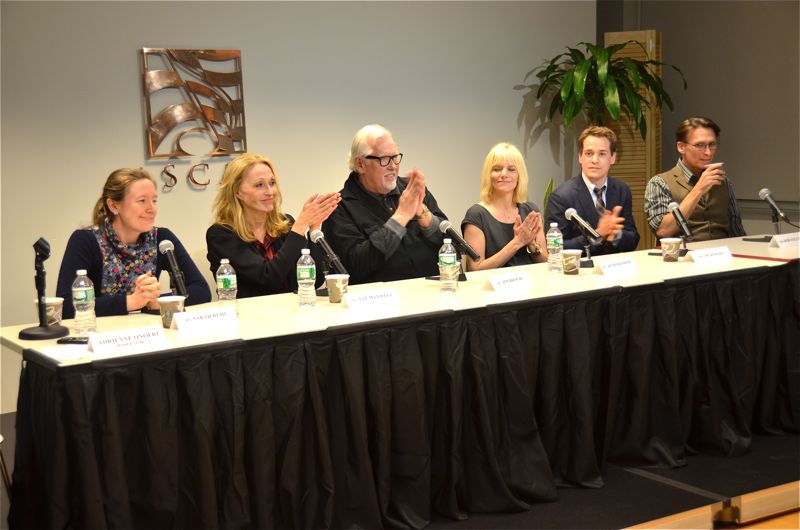 Why have producers been mounting so many plays about plays lately, and why do audiences seem to love them so much?

That’s the question that sparked theater journalist Adrienne Onofri to gather a distinguished panel of actors and playwrights under the title “Art Imitates Art:  The Enduring Appeal of Theater About Theater,” and moderate their discussion for Drama Desk in January. In her opening remarks before a crowd of Drama Desk members and guests at ASCAP Headquarters, Onofri admitted she couldn’t pinpoint the exact moment that the lightbulb query went on, but it occurred to her sometime in the weeks she saw Character Man, Stage Kiss, Act One, and Bullets over Broadway in quick succession and noted how all these productions featured glimpses into the characters or behind-the-scenes shenanigans from the theater. Moreover, in the recent past, she noted, New Yorkers have had the opportunity to see Venus in Fur, The Country House, It’s Only a Play, Bandwagon, On the 20th Century, Something Rotten, The Real Thing, and Noises Off! So what’s the deal?

Playwright Sarah Ruhl (Stage Kiss) explained there were two reasons she decided to write about the theater. There was the “timeless cosmic reason” that attracted dramatists as early as Shakespeare to ponder how “all the world’s a stage.” Then there was the “prosaic reason: it’s what we know.” Ruhl described the genesis of her play: after attending rehearsals in which she saw actors practicing a kiss, she imagined what would happen if two ex-lovers had to rehearse a kiss over and over.

Jan Maxwell (Follies, The Royal Family) insisted she approached the portrayal of actors as she would any other character, but suggested audiences are fascinated by such plays because they want to see behind the actors’ masks: “We’re con artists and we ask audiences to believe us … so they get curious: What are you like backstage? How did you con me?”

Actor and playwright Jim Brochu (Zero Hour, Character Man) delighted listeners with his origination story: his father introduced him to old friend Ethel Merman when Brochu was coming of age. She asked him what he wanted to do when he grew up. “I said, This!” Naturally, he felt he could serve as “a link in the chain” by introducing a new generation to journeyman actor David Burns and larger-than-life Zero Mostel.

“I just love Broadway and walking through the stage door,” enthused Jennifer Foote, who performed in A Chorus Line, one of the most iconic shows about the business of making a living in show business. “As an ensemble dancer it was great to support leads but it’s really special to step out and tell a story.”

Onofri asked T.R. Knight (Noises Off!, A Life in the Theater) what he discovered about the theater by playing an actor onstage. “The desperation,” Knight replied, garnering some knowing laughs. He connected the role of the Stage Manager in Noises Off! to his stint as Flute in A Midsummer Night’s Dream at the Guthrie. “Both characters don’t want to be onstage but are sucked in.” He added: “It’s also great to make fun of yourself as an actor—how we work so hard to get it right and in these two cases the world in the play falls apart.”

Another actor Bob Stillman (It’s Only a Play, Act One) noted he’d spent the last year “working on plays about putting on a play.” He had hard-won advice on portraying an actor: “You can’t be too high-falutin’—you have to let characters sit and talk and reveal their heart.”

As the discussion opened up to tackle the question of why “meta-drama” was so popular, Stillman suggested we only have to look at our culture. “Everyone’s a performer. There are so many award shows. Everyone’s fascinated to see what success and fear is really like.” He pointed to the film Birdman as a great example of this prurient interest in seeing a celebrity leveled and lost.

For centuries, everyday people have seemed to crave watching or reading about the fall of extraordinary, larger-than-life figures. What better way to get this fix than to see actors unmasked? Usually, audiences only glimpse behind the actor’s mask during the curtain call—unless they’re watching a play about the stage. Or better yet, they are lucky enough to attend a Drama Desk panel on a cold rainy midwinter evening.