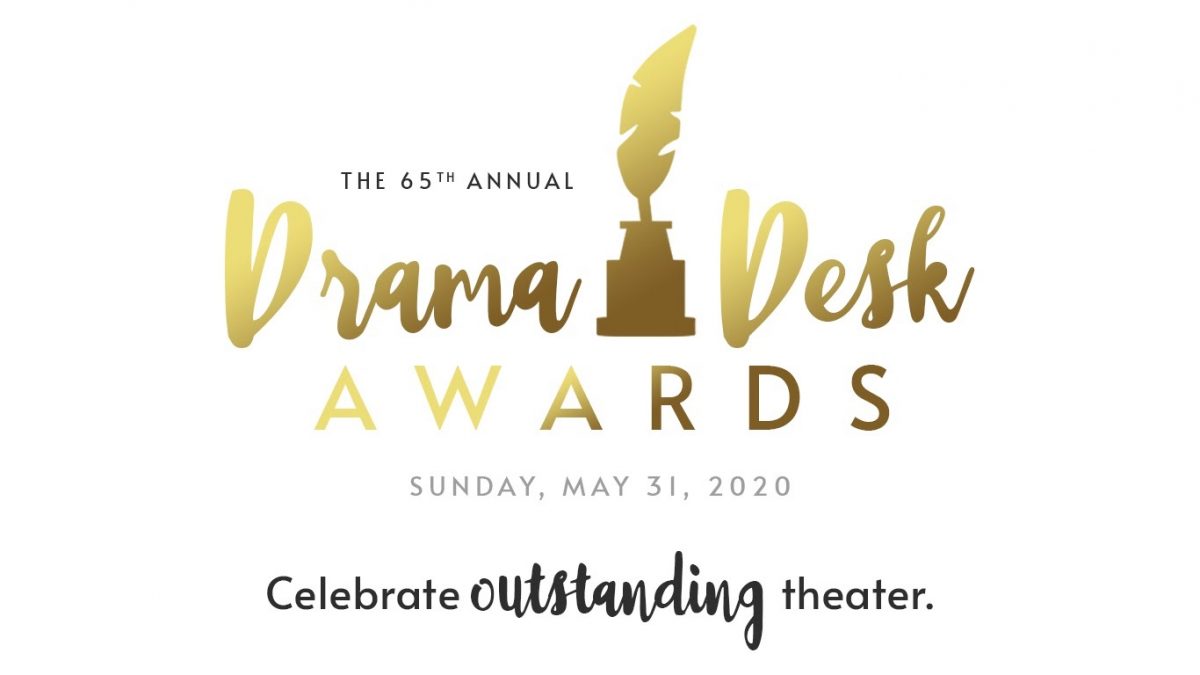 HOSTED BY FRANK DILELLA
AWARDS POSTPONED
SUNDAY, MAY 31, AT 7:30PM ET
ON NY1
STREAMED ON NY1.COM AND DRAMADESKAWARDS.COM

NEW YORK, NY (May 28, 2020) – The 65th Annual Drama Desk Awards have announced this year’s presenters, featuring an all-star line-up of Drama Desk Awards alumni and friends. The winners will be announced during a special presentation of Spectrum News NY1’s On Stage on Sunday, May 31, at 7:30 PM ET. The awards special also will stream on NY1.com, and DramaDeskAwards.com.

The special celebration of the theater season will benefit The Actors Fund and its imperative work to provide emergency financial assistance. Donations can be made at actorsfund.org/dramadeskdawards.

The ceremony will also celebrate the life and legacy of American theater producer and director Hal Prince with the Drama Desk Awards’ first-ever lifetime achievement honor. The Harold Prince Award will be bestowed annually for outstanding contributions to theater, and this year will be awarded posthumously to Mr. Prince. Prince passed away on July 31, 2019 at the age of 91.

The event will also feature a first look at the brand-new Drama Desk Awards statuette.

The Drama Desk Awards are presented by the Drama Desk organization in partnership with Broadway Brands. The presentation is produced in consultation with Joey Parnes Productions, continuing a relationship formed in 2012.

Visit the Drama Desk Awards website for updated information as it becomes available.

The mission of the Drama Desk is to recognize outstanding achievement in New York theater and encourage discussion of issues significant to theater professionals. The organization accomplishes these goals by bestowing annual awards in more than 30 categories of theater arts and crafts, hosting the awards celebration, and presenting educational forums and panel discussions on theater topics.

The Drama Desk was founded in 1949 by New York Times arts reporter Sam Zolotow, Edith Oliver of The New Yorker, and New York Post critic Vernon Rice, among others. Six years later, after Rice’s untimely death, the organization initiated an award in his honor for outstanding achievement Off-Broadway. Subsequently expanded and renamed the Drama Desk Awards, they now recognize accomplishments on Broadway, Off-Broadway, and Off-Off Broadway.

Based in the heart of Times Square, Broadway Brands (broadwaybrands.com) is a theater media conglomerate that seeks to build creative, informative, and inspiring products for a variety of audiences on Broadway and beyond. The company made its debut in 2015 with the launch of Broadway Briefing, and recently launched the Broadway App, with more brands on the way.

Broadway Business (broadwaybusiness.com) is an exclusive new suite of products for Broadway professionals.

Broadway Brands is building a community of entertainment entrepreneurs, with a passion for taking show business seriously. It celebrates the history of the industry and is even more excited for its future.

Led by Joey Parnes, a Broadway producer and general manager with over 40 years’ experience, Joey Parnes Productions produces, executive produces, and general manages theatrical productions from the commercial and non-profit worlds, both on and off Broadway, internationally and on the road. Credits include A Gentleman’s Guide to Love and Murder (Tony Award), Hello, Dolly! (2017; Tony Award), To Kill a Mockingbird, Bright Star, Fish in the Dark, The Humans (Tony Award), A Raisin in the Sun (2014; Tony Award), Vanya and Sonia and Masha and Spike (Tony Award), HAIR (Tony Award) and Passing Strange, among many others. Currently, Joey is working to bring the musicals Almost Famous and KPOP to Broadway. He is a past president of the Yale Dramatic Association and teaches Producing for the Commercial Theatre at Yale School of Drama. Joey served as the Coordinating Producer of the Tony Awards from 2001 to 2008 and has produced the Drama Desk Awards since 2012.

About The Actors Fund

The Actors Fund is a national human services organization that fosters stability and resiliency and provides a safety net for performing arts and entertainment professionals over their lifespan. Through offices in New York, Los Angeles and Chicago, The Fund serves everyone in film, theater, television, music, opera, radio and dance with programs including social services and emergency financial assistance, health care and insurance counseling, housing, and secondary employment and training services.

Since March 18, 2020, The Actors Fund has provided more than $11 million in emergency financial assistance to over 9,363 people who work in performing arts and entertainment. With shutdowns on Broadway and in film and television, theater, concerts, dance, music and many other areas of entertainment, the need is great and growing. This emergency financial assistance is helping our most vulnerable and those in financial crisis with assistance for basic living expenses such as essential medications, to help prevent evictions, and to pay for food or utilities.

As the situation with Coronavirus (COVID-19) continues to evolve, The Actors Fund has temporarily transitioned to online and phone-based services, which remain available for everyone in the performing arts and entertainment community. These services include: Artists Health Insurance Resource Center,The Career Center,Housing Resources, Addiction & Recovery, HIV/AIDS and Senior Services, Counseling and Emergency Financial Assistance, as well as The Friedman Health Center for the Performing Arts in New York City. www.actorsfund.org/dramadeskdawards