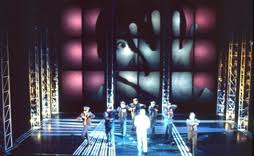 Projections by Wendall Harrington for
The Who's Tommy

Bob Cashill Looks Behind the Slides

Projections are now an essential part of the theatrical landscape. We’ve been seeing them all season, used in different ways—as a backdrop to a seamy New York in Lucky Guy, as a playground for Bill Irwin and a mini-Bill Irwin to romp in Old Hats, as a tapestry for empowerment in Emotional Creature, and as a comic fantasia for P.S. Jones and the Frozen City. Courtesy of the Drama Desk, they’re now part of the theatrical awards arena, too.

In a trend-setting move the Drama Desk Board approved the addition of a new permanent category, Outstanding Projection Design. This is a significant first for awards bodies in the city. “Our decision to create an award for this category keeps Drama Desk on the cutting edge of innovation in the New York theater community,” said President Isa Goldberg.

It’s not a first for the Drama Desk, however. In the 2007-2008 season the Board agreed to create a category, Outstanding Projection and Video Design, based on input from the nominating committee. I was part of that committee, which spent the season bowled over by arrays of impressive projections on, Off, and Off Off Broadway. The winner, the revival of Stephen Sondheim’s Sunday in the Park with George, had transcendent contributions from Timothy Bird and The Knifedge Creative Network that “finished the hat” in a unique and unforgettable way, distinct from the famed painted elements that won Tony Straiges a Drama Desk Award for the original 1984 production.

Since then projections have been honored as part of set design; projection designer Jon Driscoll, set designer Rob Howell, and illusionist Paul Kieve won in 2012 for Ghost the Musical, conjuring spectacular spookery that whisked audiences through a haunted New York. This was not a first, either. Twenty years earlier, set designer John Arnone and projection designer Wendall K. Harrington, an eminence in the field, won the 1993 Drama Desk Award for their kaleidoscopic collaboration on The Who’s Tommy. (In contrast, Arnone alone won the Tony.) Arnone and Harrington’s award-winning feat was accomplished with old-fashioned slide projectors. The technology has since upgraded to video, and the equipment is more affordable and less cumbersome. Animating it all are the visions of the designers who, thanks to Drama Desk’s new annual projection design award category, will be recognized as a vital part of the theatrical design field. –Bob Cashill