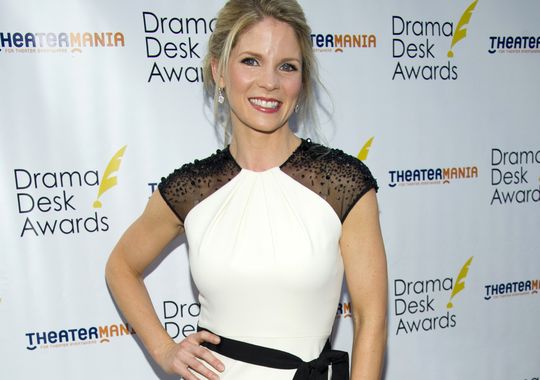 Drama Desk board member Elysa Gardner shares her sneak peak at three new Broadway musicals that was first published in USA Today, for whom she is a reporter and critic. To read the original piece, click here.

John August and Andrew Lippa knew that they were on to something when they both broke down in tears.

The two men, who respectively wrote the book and score for the new Broadway musical Big Fish, were discussing the father-son relationship central to their story, inspired by the 1998 Daniel Wallace novel of the same name. Having watched their own fathers die, as the son in Big Fish does — August while he was still in college, Lippa while working on the musical — they were reflecting on those relationships while crafting the show’s finale.

“We found ourselves crying in this hotel room,” Lippa recalls, chatting with August and Dan Jinks, one of the show’s lead producers, during a rehearsal break. “And then John said, ‘Go write the song, right now, and I’ll write the scene.’ ” In it, Edward Bloom, a traveling salesman whose tall, often self-aggrandizing tales have frustrated his son, Will — now a grown man with his own child on the way — comes to realize that “at the end of our lives, it’s not about the stories we tell or the grand things we believe, but the connection that we have with one another.”

That epiphany alone would seem to distinguish Big Fish, set to begin previews Sept. 5 and open Oct. 6 at the Neil Simon Theatre, from any number of movie adaptations that have graced the Main Stem in recent years. Dating back to 2001’s mega-hit The Producers, a number of such musicals have found inspiration in frothier fare with higher camp value, from Monty Python’s Spamalot to Xanadu and Legally Blonde. Even shows that have dangled more socially or morally conscious narratives —Hairspray, for instance, or Priscilla Queen of the Desert — have tended to wrap them in a good deal of cheek.

This fall’s Broadway offerings include a number of titles, and names, familiar to movie fans, from the new play A Time To Kill — adapted from the best-selling John Grisham novel, which was made into a 1996 film — to productions featuring Ethan Hawke (yet another Macbeth), Orlando Bloom ( a biracial Romeo and Juliet), Billy Crystal (a return engagement of his one-man show 700 Sundays) and married stars Daniel Craig and Rachel Weisz (a revival of Harold Pinter’s Betrayal).

But the upcoming season is particularly notable for bringing several new musicals based on dramatic films, or their source material. Big Fish, which is being helmed by the widely admired director/choreographer (and Producers alumna) Susan Stroman, will be followed early next year by stage adaptations of Rocky, the 1976 Cinderella story that was Sylvester Stallone’s breakthrough blockbuster; and Robert James Waller’s best-selling 1992 novel The Bridges of Madison County, which became a Clint Eastwood film starring Meryl Streep as a married woman who falls in love with a photographer, played by Eastwood, visiting her small town.

And the artists contributing to these shows seem well aware that they’re working in a different tradition than the one represented by many contemporary musical comedies.

“The musicals that have been very successful with audiences over time are generally the ones that traffic in big emotions,” notes Lippa, whose credits as a composer and lyricist range from Broadway’s The Addams Family to the darker, more reflective The Wild Party. “You don’t see a comedy a second time, because the jokes aren’t as funny, mostly. But people have gone back to see Les (Miserables) five, six times.”

Veteran director Bartlett Sher, who is guiding Bridges, points further back, to the groundbreaking shows of Rodgers and Hammerstein — who helped define American musical theater as the story- and character-driven form it became during Broadway’s mid-20th century Golden Age — and the witty but probing works of Hammerstein’s protege Stephen Sondheim.

“If you think of musicals like South Pacific, Oklahoma!, Sunday in the Park with George, Sweeney Todd — they present real stories, each of which suggests its own sound,” says Sher. Though not “immediately attracted” to Bridges, he admits, Sher found the “basic bones of the story to be suited to the musical form. It has a beautiful sense of location, and I had great collaborators,” in librettist Marsha Norman and composer/lyricist Jason Robert Brown, “who really give you the arc of this man and woman going through a dramatic change, so that their breaking into song makes sense.”

Bridges‘ leading lady, Kelli O’Hara — who previously worked with Sher in Lincoln Center Theater’s celebrated 2008 revival of South Pacific and its 2005 Broadway premiere of The Light in the Piazza, and recently starred off-Broadway in Far From Heaven, another musical adaptation of a screen drama — says his last point is key.

“When you step out and do a song in a musical, the easier thing to do is make it funny,” says O’Hara. “But when those transitions become necessary, when they aren’t camp — that to me is magic. I’ve done musical comedies and enjoyed them, but subject matter that’s deeper and more realistic is always what’s appealed to me most.”

Such transitions obviously pose different challenges, and opportunities, from those in a non-musical film. Lyricist Lynn Ahrens, who wrote songs for Rocky with her longtime collaborator, composer Stephen Flaherty (Ragtime, A Man of No Importance), observes that the titular boxer and his love interest “are these two wounded outsiders who don’t express themselves very articulately. There are actually a lot of silences in the film. But we sense these withheld passions in them — and we could use that in the show, when they sing.”

In the case of Big Fish — which in its 2003 Tim Burton screen incarnation included a number of fantasy sequences, with characters such as a gentle giant and a witch who sees the future, both retained in the musical — the potential for a musical-theater conversion was obvious from the start, to August, who wrote the screenplay, as well as Jinks.

“The first conversation we had was actually right before the movie came out,” Jinks remembers. “But we knew that a theatrical experience would have to be its own thing” — a point echoed by Sher, who still hasn’t seen the film version of Bridges in it entirety, and by August, who “never opened my old script” while working on the stage version of Big Fish, and only watched the movie again after the musical had its world premiere in Chicago last spring.

August was particularly excited about the prospect of having Edward Bloom and his wife, Sandra, who in the film are played by different actors in young adulthood and their older years, each portrayed by one performer on stage: two-time Tony Award winner Norbert Leo Butz as Edward, and Kate Baldwin as Sandra. “Movies are so literal that you can’t have an actor age from 16 to 65,” August notes. “On stage you can, because the audience is on your side.”

How Broadway audiences will respond to Big Fish — and to Bridges and Rocky, which respectively begin previews Jan. 13 and Feb. 11, with openings set for Feb. 27 and March 13 — remains to be seen, of course. The musicals Far From Heaven andGiant, based on the 1956 screen epic, enjoyed successful runs off-Broadway just last season. But closer to Times Square, recent adaptations of Ghost and Hands On A Hardbody generated little enthusiasm among critics or audiences.

Longtime Broadway producer Kevin McCollum (Motown the Musical, In the Heights), who recently formed a joint venture with 20th Century Fox and other executives to develop stage productions based on the studio’s films, is nonetheless hopeful that a wider range of movies will prove ripe for musical treatment in the near future. “Because there’s more and more technology in film, I think people are thirstier for shows that make the human being the center of the story,” McCollum says.

That, of course, can be done with humor, a key element in most drama, including the classic musicals cited by Sher. Director and librettist James Lapine, a frequent Sondheim collaborator who helmed the current Broadway revival of Annie and will be represented off-Broadway this fall by a musical adaptation of the 2006 film Little Miss Sunshine, was impressed by the balance that Harvey Fierstein managed in his book for the current musical smash Kinky Boots — also a movie first.

“Most people who have seen Kinky Boots onstage probably didn’t see the movie, which was pretty obscure,” says Lapine. “The producers did a great job in picking Harvey, someone with a track record and a very specific point of view. A musical has to have something to say, some reason to be. You have to be compelled to write it for a reason.”

Lippa, who with August has spent a good chunk of the past nine years trying to ensure that the musical Big Fish has something to say, concedes that avoiding sentimentality has been a concern for him — but not an especially pressing one.

“The trick is staying honest,” Lippa says. “John and I relate to the people in this show, and we tried to write about them at a level that’s a little more honest than you can be in real life. If you write that way, it’s not sentimental; it’s really emotional. And that’s how you draw people in, I think.”–Elysa Gardner, USA TODAY