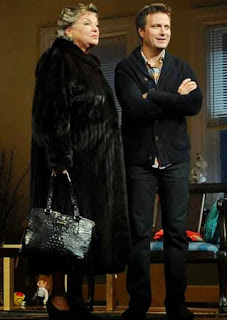 Tyne Daly and Manoel Felciano at the
Bucks County Playhouse in Mothers and Sons,
now coming to Broadway in March
(Photo: Mandee Kuenzle)

For several years now, longtime Drama Desk member and past President David Sheward has offered members a handy and helpful list of each season’s major New York openings. Sheward offered to answer a few questions and share his list with DramaDesk.org, a list that he updated in December (see below or visit thedaviddesk2.blogspot.com).

2. You were President for several years. Given the job’s responsibilities and natural frustrations, what would you say were your best one or two memories/experiences as President?

Probably the most exciting and memorable experience was when the Drama Desk
Awards were broadcast live from the Booth Theatre on New York-1 News and I
stepped out onto a Broadway stage introducing the show. There were all these
important theater people in the audience and I had the privilege of representing
our organization. It was wonderful to see that we were being taken seriously and
that we were presenting a high-class ceremony.

3. Many Drama Desk members have looked forward with anticipation to your annual
efforts to inform us of the opening dates before each season. When did you start
compiling this list and what was your inspiration?

I started doing the list for myself a few seasons ago just to keep my schedule
straight. It can be rather confusing when a lot of shows are opening close
together, especially towards the end of the season when everyone is racing to
meet the deadline for the various awards including ours. It helped when setting
up review dates with the press agents. Then I thought why not share it with the
rest of the Drama Desk, so they can have all the upcoming openings in one place?

4. Can you describe your current website (theDavidDesk2.blogspot.com) and a couple of the best reasons for DD members to visit?

My blog, The David Desk 2, is where I can write whatever I want to without
filtering it through an editor. I can address any topic and give my frank
opinion. In addition to theater news and commentary, I write about serious
subjects like politics or silly stuff like my favorite reality TV shows. It’s
kind of a catch-all for my various interests.

Here’s David’s updated report:Terrence McNally’s Mothers and Sons has finally found a home. The drama which had its world premiere at the Bucks County Playhouse earlier this year will begin previews at the Golden Theatre, formerly occupied by the short-lived A Time to Kill, on Feb. 23 and then open on March 24. Tyne Daly will star as the mother from McNally’s one-act and teleplay Andre’s Mother, several years later. She plays an unexpected call on the partner of her son who died of AIDS, and has a cultural shock when she realizes the man is now happily married to a new partner with a young son.
That makes the Broadway season almost complete. The long-awaited Houdini with Hugh Jackman looks as if it’s been put off for another two seasons. The only major show which had announced for this season and still has no theater is Will Eno’s The Realistic Joneses which features an all-star cast (Toni Collette, Michael C. Hall, Tracey Letts, Marisa Tomei). I don’t know where they are going to go. They could take the Booth if The Glass Menagerie does not extend again. Or the Cort once Patrick Stewart and Ian McKellen are finished waiting for Godot in no man’s land.