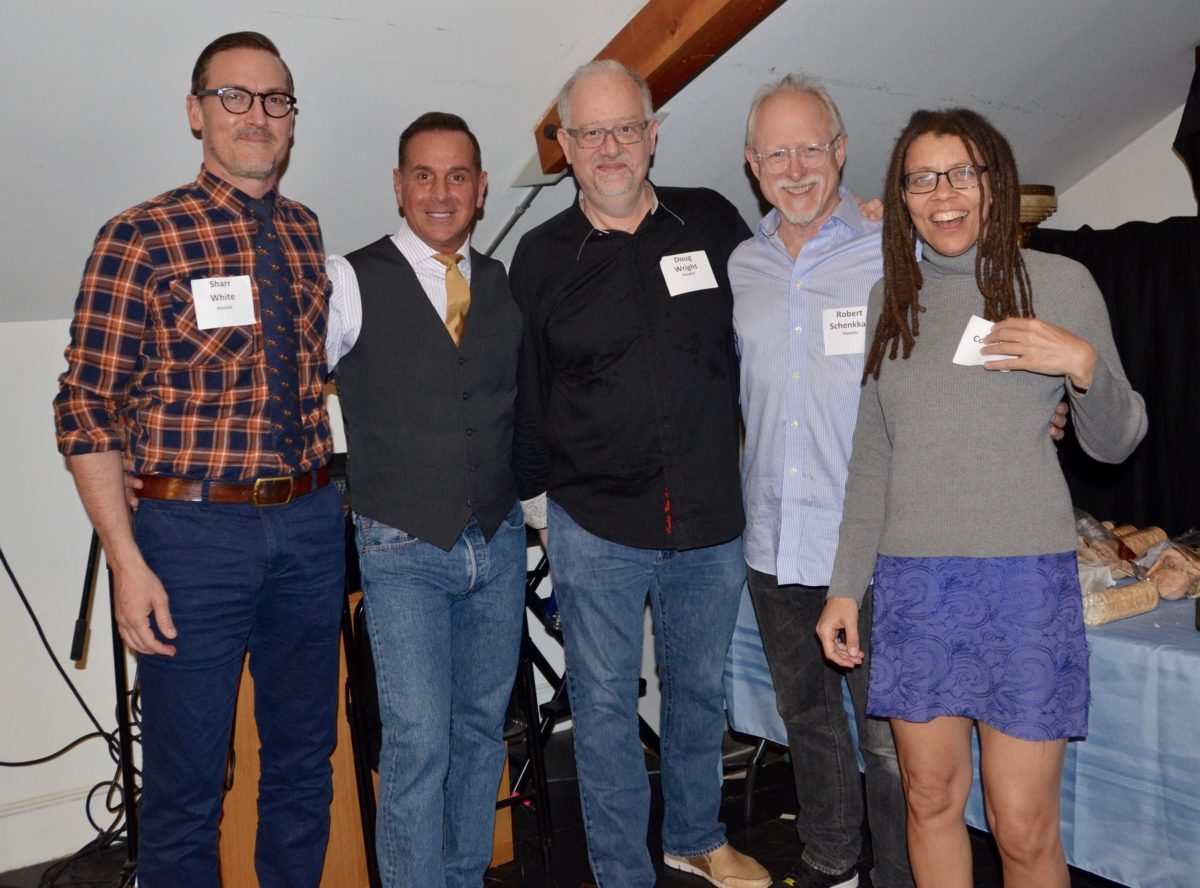 Drama Desk hosted an in-house discussion about the often prickly relationship between playwrights and the professional critics who review their work. David Kaufman reports.

With a topic that all but defines a paramount aspect of the Drama Desk organization—the relationship between theater critics and playwrights—a panel on March 16 prompted some surprising observations and lively discussion. Called “Playwrights & Critics: Bridging the Gap,” the panel was put together by Sherry Eaker, who introduced the event by explaining that it grew out of two previous “open forums” on the subject, which she organized originally two years ago for the American Theater Critics Association as part of its Perspectives in Criticism series.

As before, the panel was moderated by playwright Doug Wright (Quills, I Am My Own Wife), who introduced a new gathering of playwrights: Kia Corthron (Breath, Boom, and a new novel, The Castle Cross the Magnet Carter), Matthew Lombardo (Looped, Tea at Five), Robert Schenkkan (The Kentucky Cycle, All the Way), Sharr White (The Snow Geese, Annapurna). Before offering the panelists a series of specific topics, Wright introduced the subject with subtlety, eloquence and, yes, humor: “We’re all advocates for the same imperiled art and the same art form, [but] circumstances, more often than not, seem to cast us as adversaries.” And, as Wright added: “Playwrights are simultaneously the most arrogant and the most vulnerable people that I know…. So as critics, good luck pleasing us.”

Wright’s first topic focused on how, unlike many other cities, New York is “blessed with a multitude of critics, but historically, it’s beholden to a very few voices.” This gave rise to an inevitable discussion regarding the “all-reaching power of the Times,” as specified by White. After Lombardo pointed out that he never opened a play “cold” in New York, but always started out at other theaters before bringing it in, he added that when High premiered in Hartford, Charles Isherwood showed up unannounced and uninvited, to cover it. While emphasizing that the “stakes are higher in New York,” Schenkkan claimed that, “if the show is in development, we don’t want the national press there.”

Corthron allowed that, “by the time I was produced in London, I started my practice of not reading reviews,” prompting Schenkkan to add that he has “someone vet the reviews for me.” For his part, while White acknowledged that he does read reviews: “It’s not like it’s going to affect my performance that night.”

In response to Wright asking, “Is it even fair to ask critics for objective criticism,” Lombardo referred to the critic “who reviews what he saw” versus the critic “who reviews what he’d like to see,” which led to the inevitable discussion about the impact of the internet on reviewing, or, as Wright described it, “the democratization of criticism.” White bemoaned having had a play reading of his, at the Manhattan Theater Club, covered by someone on the Internet—as if it were a review of a legitimate, full-out production—before referring to his admiration for the “deeply intelligent” Hilton Als (The New Yorker), as opposed to the “petty viciousness” exhibited by some other critics—“that’s catty and shocking and sad.”

“What do you think we owe the critical community,” continued Wright. “Do you think we owe the critical community [anything]?” Schenkkan feels with his director and his dramaturg “that you are a team.” But unfortunately, “I don’t feel the dialogue between playwrights and critics is necessarily a collaboration, [or that] we are, in fact, trying to achieve something together.” But Schenkkan was also quick to point out that this is his first year as a Tony voter: “I have to see 20 or 25 shows–I don’t know how you do it,” he added, addressing the critics in the room. “I have so much more appreciation for the challenges that you face.”

“Most critics I talk to feel they have a responsibility as curators of the art form…. Do you think that critics have an obligation to us, or does their obligation lie elsewhere?” inquired Wright. White feels that the critics’ responsibility is “to their readers.” Before opening up discussion to the room, Wright then referred to Nathan Heller’s article in the March 7 issue of The New Yorker, written in response to film critic A. O. Scott’s recently published book, Better Living Through Criticism.  (Corthron brought the Heller article to the panel’s attention.) In his “absolutely amazing” article, Heller, breaks down critics into “three schools”: “first responders, scholars, and seducers,” allowing that some critics may “embody” a combination of those qualities.

Drama Desk member Phil Dorian proceeded to identify himself as a “first responder,” when, for instance he covers White’s plays at the New Jersey Rep; but also more of the “scholar” (though he shuns the word) when he covers plays at the Stratford Festival in Ontario. ”I write more about Sharr’s play, than the production, because it’s a new play,” explained Dorian. After years as a writer for Theatre Communications Group, Randy Gener identified himself primarily as a “seducer” of his audience, but he also expressed the need to “satisfy these folks,” alluding to the playwrights.

When Lombardo complained about Michael Riedel’s customarily denigrating works for the New York stage, both Dorian and former Drama Desk President William Wolf were quick to point out that Riedel is not a critic, but a gossip columnist—as he would be the first to claim.

Another Drama Desk member, Adrienne Onofri, picked up on the matter of “diversity,” as raised by Wright. “It bothers me when those critics’ round tables around Tony time—on New York One or Channel 13—are embarrassingly less diverse than if you watch ‘Meet the Press’ or members of Congress,” she said. Corthron said that she likes the fact that “there are many voices out there—even if some of them are terrible voices.”

After Schenkkan pointed out that Wicked passed the billion-dollar mark last year (“But it doesn’t trickle down, for the most part”), critic and DD member David Finkle said that particular musical raises an interesting issue: “because critics didn’t like Wicked, but the public did.” One critic, Drama Desk board member Leslie Hoban-Blake, claimed she did like Wicked, before the conversation veered to the high cost of tickets. “This becomes something that’s on our minds, when it’s not necessarily meant to be,” said Finkle. “We have to also write for people who have the money, might want to go and see this show, because it has a terrific set, for example.”

Representing the playwrights’ point of view, Wright responded, “I don’t think any of us sit down and work on a play, saying, ‘Well, this play is a $140 play,’ and ‘This play is a $40 play.’”

Though it was not the last word, in fact, it served that purpose, when Finkle added, “Critics love the theater and I think it’s frequently forgotten. We’re not adversaries. We go because we love the theater.”–David Kaufman