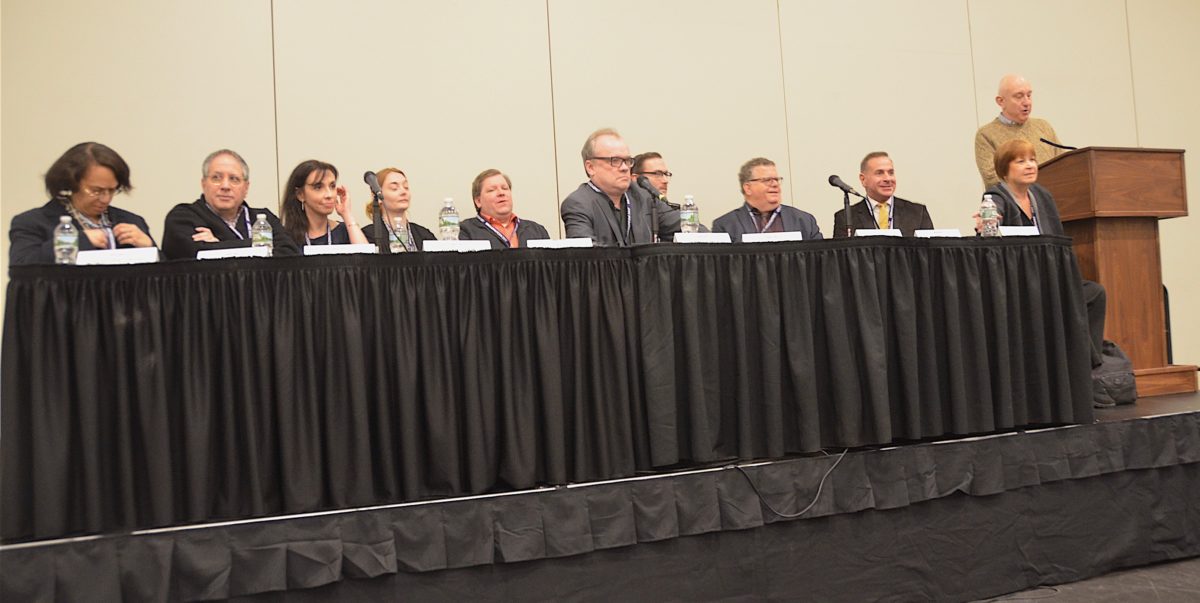 The Drama Desk presented a panel, “Everyone’s a Critic,” as part of the second annual BroadwayCon at the Jacob K. Javits Convention Center in Manhattan. The topic was the changing nature and function of theater criticism, and of critics, in the digital age.

Asked to reflect on how the role of the drama critic has changed in recent years, Gardner, a 16-year veteran of the profession, said: “Over the past five years, change has been exponential; and, in the last two years, we’ve seen more and more digital outlets. Now everybody really can be a critic.”

When Jones suggested that the “old-style newspaper critic” might be “going away,” Marks (first-string theater critic of the Post and formerly of the New York Times) responded, “We’re not going away, but my kind of job will change a lot.”

Marks predicted that the newspaper critic of the future will need to be “as adept at social-media discourse as at writing columns; and, instead of merely espousing his or her own taste and aesthetic response, will have to be thoroughly versed in what the readership likes and thinks. The critic of tomorrow won’t be merely sharing his or her opinions,” Marks said, “but speaking more directly to the concerns of the readers.”

To support his statement that writers are under swiftly increasing pressure to attract eyeballs to their publications, Marks recalled the spike in online attention when, on Nov. 19, he responded in print and online to President-elect Donald J. Trump’s Twitter comment that the “[t]heater must always be a safe and special place.” Trump was expressing his view that, on the evening of Friday, Nov. 18, the “cast of Hamilton was very rude … to a very good man, Mike Pence.”

In his Post article, Marks suggested that the “challenging words” directed to the Vice President–elect by Brandon Victor Dixon, the actor playing Aaron Burr in Hamilton, “and the contretemps surrounding [those words] portend a contentious relationship between the Republican-led government and an arts community that may be preparing to take it on publicly.” The gist of Marks’ opinion piece was that serious theater should not “be docile” or “an innocuous landscape filled exclusively with chorus girls and holiday pageants.” (https://www.washingtonpost.com/news/arts-and-entertainment/wp/2016/11/19/hamiltonpence/?utm_term=.51302242b7e7https://www.washingtonpost.com/news/arts-and-entertainment/wp/2016/11/19/hamiltonpence/?utm_term=.51302242b7e7)

Marks told the panel’s audience, “We have a board in the newsroom at the Post that indicates how many readers are accessing particular articles online at any given time. The day that the article was published, I watched my readership climb by the minute to become No. 2 for the whole website.”

Several panelists talked about critics’ responsibilities. Paraphrasing Christopher Hitchens, Shaw said that, in her book, “one of the greatest sins is enthusiasm for mediocrity.” She said, “Being a critic—the action of writing about theater—is a matter of slow, deep thinking about what one has seen and heard.”

Shaw remarked that she frequently leaves the theater wishing she had liked the play and performances more. “The person who likes a production wins. … Liking means pleasure and gratification; and that’s part of what we go to the theater for.”

Without contradicting Shaw, Gardner ruminated that, “as arts coverage diminishes, critics have a responsibility to think twice about what we’ve seen—and especially to avoid snark and self-indulgence and the things you want to say for your own sake. It’s important for critical writers to be nuanced, just as we expect the art on stage to be nuanced.”

Armstrong spoke to the students in the audience: “Going to the theater is a gift from the gods. If the production is done well, you are absorbed, taken out of your own life and world. As for the critic, he or she is there to help the writer see her or his work from a difference perspective.”

An audience of approximately 250 took time away from the performances, exhibitions, and shops in the convention’s main concourse to attend the panel, which the Drama Desk presented at the invitation of the BroadwayCon organizers. (Lauren Yarger, Drama Desk Second Vice President, and Gardner were instrumental in planning the panel.)

Many of the convention attendees were costumed as favorite characters from Broadway shows, such as the Schuyler sisters from Hamilton, Jesus from Godspell, and Little Orphan Annie. The convention-goers in attendance at the Drama Desk panel, however, were less flamboyantly attired. When Jones opened the floor to questions, they demonstrated their engagement in the subject under discussion and many spoke of their ambition to become theater journalists or bloggers.

A fan of Shrek: The Musical spoke from the audience to defend Lindsay-Abaire’s libretto against the dim view of it expressed by Marks in his Post review. “Shrek,” said the man in the audience, “is the musical that made me want to be involved with theater.”