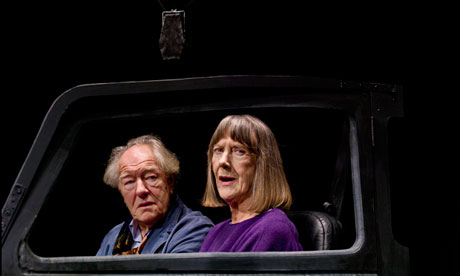 Michael Gambon and Eileen Atkins in "All That Fall"

Edward Karam reminds us that much of each season’s theatrical magic occurs away from Time Square in dazzling Off- and Off-Off Broadway productions. Here are a few of Karam’s highlights.

In a Broadway season that promises to be memorable—four Shakespeare productions, when one is a rarity—it’s possible to overlook the vast riches to be found Off- and Off-Off-Broadway.

Drama Desk members, of course, are attuned to the joys of discovery that smaller theaters offer. Past nominations prove it. For example, long before Patrick Wilson won Drama Desk awards for Oklahoma! and The Full Monty, he was singing at New York Theatre Workshop as the heel-hero in Bright Lights, Big City (1999), a performance for which he garnered his first Outstanding Actor in a Musical nomination. Nowadays David Korins may be designing massive Broadway musicals like Annie and Bring It On (not to mention Vanya and Sonia and Masha and Spike), but he was first recognized with a Drama Desk nomination for Blackbird (2004) at the Blue Heron’s 19-seat theater. (Seven nominations have followed, including a 2009 win for Why Torture Is Wrong, and the People Who Love Them at the Public Theater.) And years before her Oscar nominations in Doubt and The Help, Viola Davis won the first of her three Drama Desk awards for King Hedley II (2001).

In fact, Drama Desk consistently recognizes cutting-edge work: from exciting puppet theater (Wakka Wakka, a 2012 winner) to immersive experiences (Sleep No More, Here Lies Love) to the neglected plays that no other producers will bet on. Drama Desk members recognize that the theaters to watch out for are tucked away on streets without skyscrapers.

Here are but a few potential winners to visit.

The invaluable Mint Theater, already up and running with Philip Goes Forth, by George Kelly, plans a February revival of London Wall by John Van Druten. An early work by the author of I Am a Camera and The Voice of the Turtle, this 1931 play examines the lives and loves of women employed as typists in a lawyer’s office in London. A recent acclaimed revival in London by the Finborough Theatre, which brought the superb Cornelius to New York this summer, is additional incentive to book tickets early.

For another rarity, turn to The Actors Company Theatre (TACT) production of William Inge’s Natural Affection at the Beckett. The September production will be the first revival of the Kansas-born playwright’s working-class drama since the 1963 premiere; one can count on TACT’s actors to give the play its best shot at re-evaluation.

Yet another unsung play is on order at the Classic Stage Company in March. Drama Desk’s 1994 Outstanding Play winner David Ives adapts The Heir Apparent, a 1708 work by Jean-François Regnard. It will be directed by John Rando (Drama Desk’s Outstanding Director of a Musical in 2001 for Urinetown), as it was in Washington, D.C., two years ago. Let’s hope that its star there, the brilliant comedian Carson Elrod (recently in The Explorers Club), will reprise his role of the wily servant. (A second CSC offering, Romeo and Juliet, brings William Hurt as Friar Laurence in September; it’s an overdue return to the stage for the Oscar-winning actor.)

Perhaps the starriest Off-Broadway show will be All That Fall, which boasts Michael Gambon (Drama Desk Outstanding Actor winner 1997) and Eileen Atkins (a five-time Drama Desk Award nominee and two-time winner) on a rare visit to New York. Performances for Drama Desk winner Trevor Nunn’s staging of the Beckett radio play, which had an acclaimed run in London, begin Nov. 5 at 59E59 Theaters (a venue that won Drama Desk’s Special Award in 2008).

There’s plenty to look for among new works too. Fetch Clay, Make Man is Will Power’s look at the unlikely but true friendship between boxer Cassius Clay and Hollywood supporting player Stepin Fetchit. The production at the New York Theatre Workshop opens on Sept. 12.

Watch out, too, for Little Miss Sunshine at the Second Stage. Beginning previews Oct. 15 for a mid-November opening, the adaptation of the popular film is William Finn’s first musical since The 25th Annual Putnam County Spelling Bee in 2006. He won a Drama Desk in 1990 for Falsettoland.

Martha Clarke, whose dance-theater work always fascinates, will be taking on a new staging of the Bertolt Brecht-Kurt Weill musical classic Threepenny Opera. The production at the Atlantic Theater Company begins previews in March. Before then, in October, the busy Clarke will be premiering a new work based on Colette’s Chéri, with a text by Tina Howe, for the Signature Theatre Company.

Manhattan Theatre Club has assembled some star power for actress Amanda Peet’s first play, The Commons of Pensacola, another October production. It’s surely a good sign that the script, about a family facing a financial crisis, attracted Blythe Danner and Sarah Jessica Parker, who have won five Drama Desk Awards between them.

Also in October, 3-Legged Dog Productions will present Ben Gassman’s The Downtown Loop. It involves a bus ride and video projections, and sounds very like The Ride, which was a worthy nominee for Unique Theatrical Experience last season.

One of the most intriguing world premieres will occur at Pearl Theatre Company, which normally concentrates on the classical repertoire, when the three-time Drama Desk-winning writer Terrence McNally offers his play And Away We Go.  It’s a time-travel play about theater that encompasses visits to ancient Athens, London’s Globe (presumably in Shakespeare’s day), and the American premiere of Waiting for Godot. The opening is slated for Nov. 24.

This list barely scratches the surface of the rich vein of theater work to be offered around New York City more modest venues. There are always a few surprises as well—so be warned. It’s time to start marking your calendars for the bounty of Off- and Off-Off Broadway.–Edward Karam