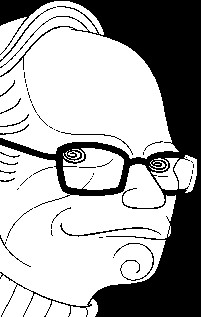 Sam Norkin: A self portrait.
All work copyright Sam Norkin; used with permission.

Sam Norkin, renowned caricaturist, illustrator, long-time colleague and beloved friend, created more than 4,000 published drawings by the time of his death in 2011 at age 94. He was the New York Daily News illustrator for over a quarter century, and he served Drama Desk as an esteemed President, functioned as the organization’s official historian, and was a long-serving member of the Drama Desk executive board. In his honor, Drama Desk created the Sam Norkin Off-Broadway Award, presented annually with a $1,000 honorarium from the Sam Norkin Estate.

Known as New York City’s “graphic reporter,” Sam Norkin held a special place in the history of the Big Apple’s newspaper theater coverage. As interest in theater escalated after World War II, editors were hungry for preview images for upcoming productions. However, until a show opened there were no photographs available.

Sam Norkin to the rescue!

He was asked to assemble all the scattered components of a production and create eye-catching images in pen and ink. Sam was given that rare privilege: full access to costume sketches, fittings, scenic designs, rehearsals, and the show’s stars. This enabled Sam to furnish newspapers with dramatic images of what was playing on the New York stage. Soon, his work was a weekly fixture of the Daily News Sunday theater section.

Sam was known to all as an irascible raconteur and virtual encyclopedia of anything theatrical. Up to the very end, he attended monthly Drama Desk board meetings and remained sharp as a tack. For more than fifty years, Sam was one of the country’s leading theatrical caricaturists. In addition to the Daily News, his drawings of theater, opera, ballet, and movie personalities [not to mention Ringling Bros. and Barnum & Bailey Circuses] appeared in such media as the Boston Globe, Herald Tribune, Los Angeles Times, Philadelphia Enquirer, Toronto Star, Variety, Washington Post, and numerous other newspapers and magazines. He was responsible for more theatrical sketches than any other artist or caricaturist. Sam also lectured on and often demonstrated the art of caricature.

He was exhibited in galleries and at the Museum of the City of New York, Metropolitan Opera, and Hudson River Museum. Sam was honored with a definitive exhibition of his drawings in 1976 at the New York Public Library and Museum of Performing Arts at Lincoln Center. So popular, it was extended to three-and-a-half months.

Sam created a lavishly-illustrated history of the Drama Desk and contributed to the organization’s annual newsletter, the annual Drama Desk Awards programs, and created such books as 1994’s Sam Norkin: Drawings, Stories and 1970’s Theatre Drawings.
Numerous books on theater featured his signature work, including 1977’s Actors Talk about Theatre by former New York Times drama columnist Lewis Funke. Sam also illustrated Having Fun with Words of Wit and Wisdom: In 3,401 Quotations from Writers Across the Ages … by veteran Drama Desk member Tom McMorrow, a colleague of Sam’s at the Daily News.
Sam was the recipient of numerous awards, including a “Silver T-Square” in 1984 from National Cartoonists Society, and Drama Desk’s Award for “Lifetime Body of Work” in 1995.

It has been very strange to those who knew the artist well to look up at show intermissions and not see Sam sketching away.

From the pen of  SAM NORKIN: