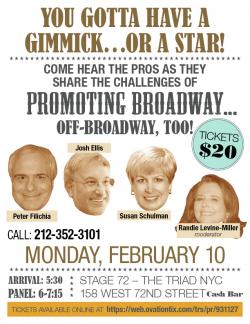 You just gotta go! Drama Desk’s upcoming panel discussion speaks to the producer’s heart in all theater lovers. Entitled “You Gotta Have a Gimmick … or a Star,” the panel, moderated by Randi Levine-Miller, features veteran publicists Joshua Ellis and Susan Schulman talking about what it takes to sell a show and make . They’ll be joined by author, theater journalist and former Drama Desk President Peter Filichia.

Guest panelist Joshua Ellis has represented more than 60 Broadway shows, including the original productions of Into the Woods, 42nd Street, Fences, The Elephant Man, The Life and Adventures of Nicholas Nickleby, Lena Horne: The Lady and Her Music, Les Liaisons Dangereuses, Love Letters, Big River, Penn & Teller, and the landmark revivals of The King and I (Yul Brynner), Dracula (Frank Langella), Morning’s at Seven, Peter Pan (Sandy Duncan), The Merchant of Venice (Dustin Hoffman), and Cyrano de Bergerac (Derek Jacobi). He is currently developing a one-man show about his adventures as a Broadway press agent.

Peter Filichia writes a column for Masterworksbroadway.com every Tuesday and for Mtishows.com and Kritzerland.com each Friday. His latest book, Strippers, Showgirls, and Sharks, was published in May 2013 by St. Martin’s Press; his next book, A Great Parade on Broadway, is scheduled for release in 2015.

Susan L. Schulman has been a theatrical press agent for more than 40 years, handling Broadway, Off-Broadway, not-for-profit arts institutions, dance, film, books, special events, and individuals. She has her own press office, and her recently published memoir, Backstage Pass to Broadway, is currently near the top of Amazon’s list of the 100 best-selling theater books. Her website is Schulmanpublicity.com.

Panel host Randie Levine-Miller spent 30 years as a publicist (Accent on Broadcasting) and is Director of Special Events for the Drama Desk. Since 1997 she has produced the annual breakfast gathering for the Drama Desk nominations, most recently held at 54 Below. She also produces and hosts benefit concerts for The Actors Fund and The Actors Temple. On Jan. 21 she is producing and hosting “Tomatoes Got Talent,” the first talent contest for women over 40, at Stage 72/Triad.